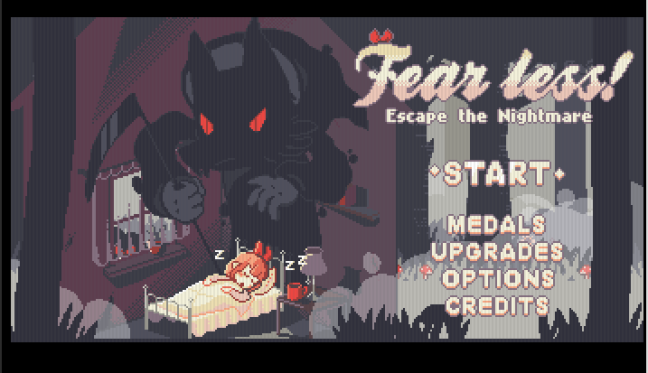 It’s been so long; I apologize for the huge gap in posts! School has been crazy for a long time but I hope to start getting this old thing back up and running.

Anyway, so I made my usual rounds on Kongregate and itch.io, and I came across this game in a newsletter from Kongregate. The thumbnail for it looked intriguing and actually kind of cute, so I decided to check it out.

Story: So as a summary, Fear Less! is about a girl whose having a nightmare that she needs to escape while also dodging various other obstacles she encounters in her dreams. Losing means the nightmare gets her and she wakes up in a panic! Although I’ve never had dreams quite like this girl, I think the game is fantastic. I won’t spoil how to beat the game, since I plan to discuss that in a later post.

Gameplay: Fear Less! is a 2D side-scrolling pixelated game, where the girl along with the nightmare tailing her are constantly in forward motion. I found it clever that to minimize controls for the player to keep track of, the combat is reduced to simply pressing a key at the right time, and your only other option is jumping. This adds a challenge, since you can’t just focus on one thing on the screen while you play, while also maintaining simplicity of controls. Replayability is added through the upgrades and medals that players can try to get, and trust me, I replayed and have all the upgrades, but still working on getting all those medals!

Overall, Fear Less! is remarkably well done, and impressive for having only two people work on it. From the plot and gameplay to the sound and art style, I’m addicted to playing this game again and again (which will come in handy later; you’ll see). If anyone is looking for at least an hour to kill and enjoys some simple combat or just likes pixelated art, I suggest checking out this game. Maybe the developers will make another game for the community to get addicted to!

You know the drill; now is when we go over the game with more of a fine-tooth comb. We’ll discuss mechanics, bugs/issues, and general technical stuff going on in the game.

Anyway, I hope you guys enjoyed this long-overdue post! As always, links are below.

And here is the link to see my gameplay of Fear Less!: Watch Me Play This Game!

If you guys are interested in seeing a post about any game you want, or you want me to review and test YOUR creation, just contact me and let me know!